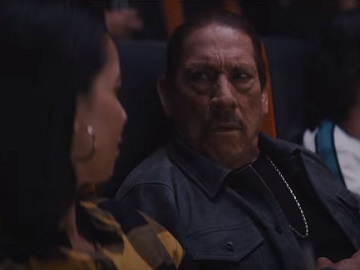 Pepsi has released a new commercial to celebrate its partnership with Regal, one of the largest theater circuits in the U.S., aimed at transforming the movie-going experience with unique beverages and snacks, on-screen entertainment and more.

The spot features a diverse cast of celebrities, including Danny Trejo, using famous movie quotes while going at the movies to a Regal movie theater. “She’s beauty and she’s grace” (from Miss Congeniality), “It’s not a man purse, it’s called a satchel” (from The Hangover), “So you’re telling me there’s a chance?” (from the 1994 film Dumb and Dumber), “I know it was you, Fredo. You broke my heart” (a line spoken by Michael Corleone, played by Al Pacino, in the 1974 film The Godfather Part II, directed by Francis Ford Coppola), and “You Sit On A Throne Of Lies” (a memorable quote, uttered by Buddy The Elf, played by Will Ferrell, the protagonist of the 2003 holiday family-comedy film Elf) are only some of the movie lines spoken in the commercial, which ends with a worker saying, before a movie starts, “This is the beginning of a beautiful friendship” (a famous quote from the 1942 film Casablanca, spoken by Rick Blaine, played by Humphrey Bogart).

“Pepsi is a brand that understands the powerful connectivity of entertainment and shares our passion for creating moments of pure enjoyment for our fans,” declared John Curry, Senior Vice President of Food Service, Regal, back in 2020, when the news have been released. “The stars aligned to connect us with the diverse PepsiCo cast of products – smash hits for movie fans and another reason why Regal is the best place to watch a movie”.