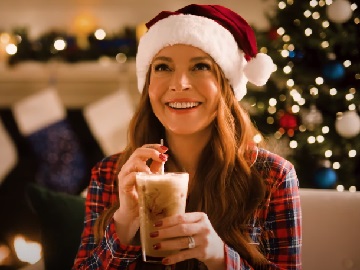 Pepsi encourages consumers to mix milk into their soda in its latest ad campaign, titled “Pilk and Cookies”. The brand has even enlisted Lindsay Lohan to promote the combination, which is Pepsi’s spin on “dirty soda”, a popular TikTok trend that combines soda with syrup and cream.

The actress is featured in a 30-second spot wearing red flannel pajamas and a Santa hat and finding a dirty soda on the table, in the living room, where she had left a can of Pepsi and a tray of cookies for Santa. After taking a sip from the beverage, she says “That is one dirty soda, Santa!”.

Pepsi urges audiences to try the combination and use the hashtag #PilkandCookies, in an online challenge running through December 25, for a chance to win cash. Participants must follow Pepsi on Instagram, TikTok, and Twitter and share a photo or video of their Pilk and Cookies.

“Partnering with Pepsi to announce Pilk and Cookies has been an incredible experience,” Lohan said in a statement. “As someone who loves the holiday season and embracing new traditions, I was thrilled to have a little bit of fun with Pepsi and their take on the dirty soda. For people learning about Pilk for the first time, I won’t lie to you when I say I was a bit skeptical when I first heard of this pairing, but after my first sip I was amazed at how delicious it was, so I’m very excited for the rest of the world to try it,” she also said.