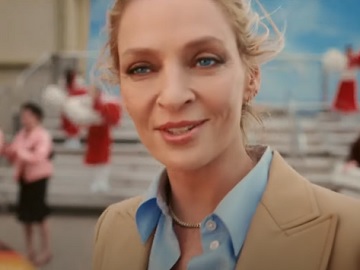 Paramount+, a brand-new streaming service, is launching in the UK and has released a new ad starring Uma Thurman to promote it.

Created by New Commercial Arts and titled “A Mountain of Entertainment”, the 2-minute film shows the award-winning actress welcoming a man to the other side of Paramount Mountain, where he delivers, together with Jack Whitehall, cups of coffee to a diverse cast of actors and celebrities, including v, Viola Davis, Gilian Anderson, Michelle Pfeiffer, Miranda Cosgrove, Trixie Mattel, Sonequa, and more.

Paramount+ features a robust offering of premier local content, an expansive library of original series, hit shows and popular movies across every genre from world-renowned brands and production studios, including SHOWTIME, BET, CBS, Comedy Central, MTV, Nickelodeon, Paramount Pictures and the Smithsonian Channel. The service is currently live in the U.S., Canada, Latin America, the Caribbean, the Nordics, Australia and South Korea.