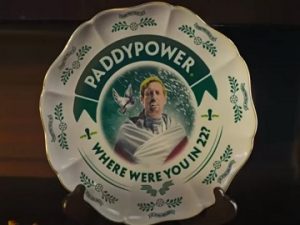 Irish betting firm Paddy Power urges people to celebrate this holiday season with a completely free Bet Builder on all England games, in its festive advert.

Created by Droga5 London and titled “Where were you in ’22?”, the spot opens with a woman playing the piano at church while a choir is singing “Deck the Halls”. At some point, as she’s watching a football game on her smartphone, placed on the piano, the lady changes the rhythms and starts playing instead the theme of the World Cup.

“You hear that? That’s the sound of Christmas and The World Cup colliding, so come on all, ye, faithful, let’s be’aving ya!” says Shameless star David Threlfall, who serves as voiceover. He then urges audiences to “knit those kits, cross those sprouts, stuff those turkeys, and attack those carols” arguing that, “from this day, we’ll forever ask ‘Where were you in ’22?'”.

The advert also informs that there will be a maximum of one free bet per customer, on every England World Cup game. Viewers are advised to claim their free bet via the promo page after 12pm, 14th November, before each England game. Maximum tree bet varies.