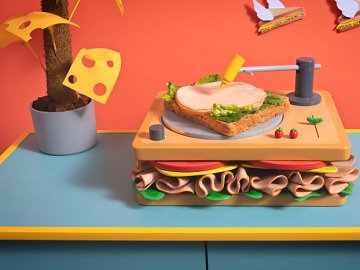 American meat and cold cut producer Oscar Mayer, known for its hot dogs, bologna, bacon, ham, and Lunchables products, advertises its meat in a commercial that features an innovative turntable.

The ad, part of a new rebrand campaign for Oscar Mayer from Johannes Leonardo, shows a turntable made of sandwich ingredients, including a slice of bread, lettuce, and a slice of deli meat, playing a tune. The needle consists of a mustard pack that spurts a stream of mustard on the rotating slice of meat.

The commercial ends with the tagline “Keep it Oscar” flashing across the screen.

The “Keep It Oscar” campaign, first launched in April 2021, marks the brand’s first master campaign in decades and also includes other spots.

For this campaign, which runs across TV, social, OOH and Tik Tok, Oscar Mayer teamed up with a variety of 2D, 3D artists, stop motion directors, CG houses and film directors. Among them are renowned commercial and music video director Calmatic and director duo Andy & Adeena, known for their work with Wes Anderson.