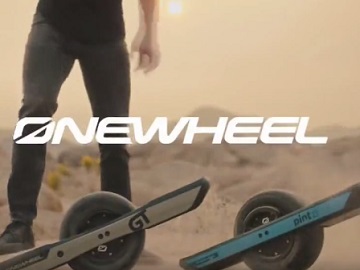 Onewheel showcases its new Pint X and GT boards in a commercial aimed at highlighting that these two new boards can make everywhere epic.

The spot features the Pint X and GT, which the voiceover says are built with more power and engineered for more field so you can crush new terrain. The Pint X is mighty, mini, compact, and features twice the range so you can take on your city, the voiceover says in the 30-second ad, which also shows people using the board on various other types of terrain, including the desert.

While the Onewheel Pint X (priced at $1400) is an upgraded version of the Pint from 2019, the GT ($2,200) is Future Motion’s first three-horsepower electric board. This model, built from scratch, rolls for up to 32 miles on a single charge and has built-in Maghandle Pro and LED headlights that are over 300% brighter than lighting in other models.

Users can sync to their board from the Onewheel App. The app lets them customize the way their board rides, check the battery status, connect with friends and more.