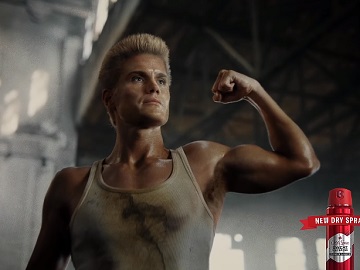 The ad is filmed like an action movie scene where a young Dolph Lundgren tries to save a man in danger, who can fall from a height any second. He asks the guy to grab his hand, but the latter notices that he’s sweating. “Didn’t you use Old Spice Dry Spray?” he asks Lundgren, who is now splashing the man with his underarm sweat. He says he did because he’s not an idiot, but soon after, when the man points out that Old Spice has long lasting sweat protection, he admits he lied and takes the spray, leaving the man fall.

The commercial ends with the Old Spice whistle and the tagline “Ridiculously Long Lasting. Smell ready for anything.” flashing across the screen.

Old Spice has teamed up with several other celebrities for its ad campaigns. Besides the brand’s famous spokesman, Isaiah Mustafa, there also are Terry Crews, Nia Long, Deon Cole and Gabrielle Dennis, who play a couple, and more.