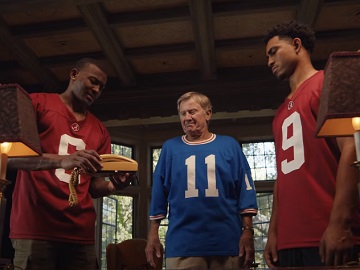 “Technology may be moving fast, but there’s still plenty Bryce Young and Devonta Smith can learn from Coach Spurrier,” this is the idea behind the latest Nissan commercial, part of the 2022 Nissan Heisman House campaign.

The next scene shows an old-style landline telephone ringing and the two players looking at it and not knowing what to do. When Coach Spurrier tells them to just pick it up, which Smith does… literally. Holding the device in his hands, the Philadelphia Eagles wide receiver exclaims “I don’t like this thing!”.

The commercial ends with the tagline “That’s how you Heisman” flashing across the screen.

Nissan is known for its Heisman House campaign, which features multiple football players. Last year’s season of Nissan’s Heisman House was inspired by fans from Texas, Wisconsin and Michigan included several others. One imagines how a Heisman House spike-ball tournament would take place, another one stars Griffin, Howard, and Mayfield showing rookie Smith the ropes, and another one features the Heisman House overrun by cat mascots.