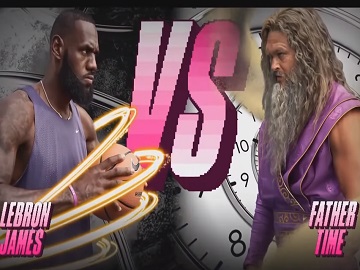 LeBron James and Jason Momoa face each other in a series of challenges in the latest Nike ad, titled Father Time.

The 30-second spot, which is a teaser for a competition between James and Father Time, opens with the Los Angeles Lakers forward training in his personal gym and watching TV, where Richard Jefferson says “LeBron James has been on absolute fire but it’s his 20th season and Father Time can’t be far behind”. At this point, Father Time, portrayed as a wrinkled man with long gray hair and long beard, by Momoa, shows up near LeBron and tells him “You know he’s right. I’m undefeated.” “We’ll see about that!” LeBron replies. As various images of the two opponents competing in feats of strength, stamina, and other silly skills, including karaoke, appear on the screen, the question “Can the king beat the clock?” is also raised, with each word flashing across the screen.

At the end of the commercial, the Nike logo appears on the screen along with the text “The battle begins. 10.20.22”.

The comedic video is part of a promotional campaign for the 2022-23 NBA season, as well as for James’ 20th signature sneaker, the Nike LeBron 20, recently released. The competition with Father Time tied in with the game between the Lakers and reigning champion Golden State Warriors, which opens the new NBA season Tuesday night.