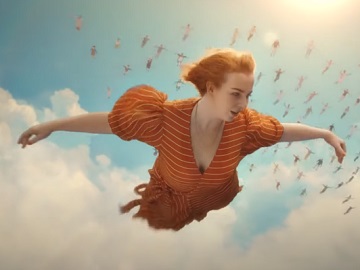 easyJet has launched a new ad campaign, titled “nextGen easyJet,” which marks the airline’s first new pan-European campaign since the pandemic began and highlights its commitment to a zero-emission future, offering, thus, its customers not just flights, but also a world of possibilities.

The spot, created by VCCP London and directed by Nick Ball, opens with an easyJet cabin crew leading a group of people down a runway. With help from the airline’s staff, the passengers take off, literally going up in the sky and flying to their dream destinations. As the advert continues, an easyJet aircraft appears and flies into the sunset.

The advert, scored by Deodato’s Also Sprach Zarathustra, ends with the tagline “extGen easyJet” appearing on the screen. The voiceover says that easyJet keeps the dream of travel alive and that’s why they offset the carbon emissions from every single flight to holiday while keeping holiday fares low.

The campaign went live in the UK on March 25 and will run across TV, AV, OLV, VOD, social and Display.

“Consumers want to know they are flying with a safe and responsible company, that champions and takes action to lead the way with environmental, social, and inclusive initiatives that drive positive change for our planet and communities, for its people and customers – that’s nextGen easyJet,” Richard Sherwood, easyJet Customer and Marketing Director, said in a press release.