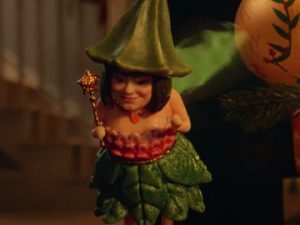 M&S has brought back its Fairy for this year’s M&S FOOD Holiday campaign and, this time, she has a sidekick: Duckie, a stuffed duck toy that she saves from a family’s dog.

In the latest spot released by the retailer, Duckie, wearing a piece of wrapping paper on his head to hide from the chasing dog, asks her where the family keeps stamps. “Why?” the Fairy wants to know. “Leggin’ it from the hound,” answers Duckie, who also mentions that he’s posting himself south for the winter.

The Fairy tells him she’s not sure he would make the best present and suggests instead a bottle of M&S Five-Times Distilled Charcoal Filtered Vodka and a Starry Night Shortbread Projection Tin, which makes Duckie conclude that “biscuits really have come a long way.”

The Fairy also adds that “These are not just gifts, there are M&S Christmas gifts”.