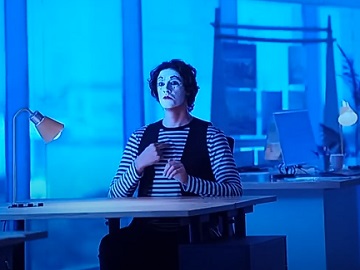 The spot features Green, Red and Brown and five office employees during a break, talking about whether to invite or not one of their coworkers, Jacques, who is a mime. The latter, who is at his desk, pretending to type at his invisible computer, is watched by his colleagues, who have mixed opinions when it comes to having him join the rest of the team. One of them doesn’t even want to hear about them inviting Jacques, but others acknowledge his qualities. M&M’s mascot Green points out that, even though he struggles on conference calls, he’s “such a dedicated employee” and another employee says that “he can really pull off stripes”.

Eventually, Jacques stands up to join his colleagues, but something happens: he acts as if a sort of wind stops him from moving forward. “Oh, there’s a wind of some kind,” one of his coworkers says, concluding that “this might take a while”.

The commercial ends with the tagline “M&M’s for all funkind” flashing across the screen.

This year, the candy marketer skipped Super Bowl after a 12-year streak. In 2021, which marked the brand’s first Big Game spot since 2019, M&M’s positioned its sweet colorful candies as a thoughtful way to apologize for life’s little irritations and come together.