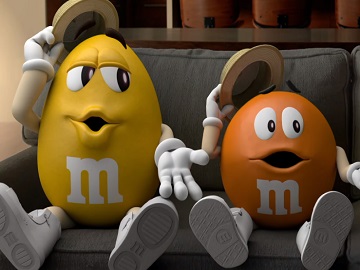 The spot features Yellow, Orange, Green and Brown watching American Song Contest on NBC. During a break, Yellow says that it’s frustrating and that if the show producers had let their a capella group in, they could have won this show. As he says this, he starts singing the phrase “could have won this show”. His fellows Red and Green do the same, showing off their singing skills and raising their hats, too, but it turns out Brown is not eager to join them. “Yeah, I’m not doing that,” she saying, throwing away her hat and refusing to perform.

The commercial concludes with the tagline “M&M’s for all funkind” appearing on the screen.

The candy brand has its very own mascots since 1954, all of which represent different flavors of the treat. There is the snarky, know-it-all Red, the dull-witted Yellow, the paranoid Orange, the sultry Green, the posh Brown, and the confident Blue. According to a press release issued in January 2022, the cute mascots will undergo a new look in an effort to promote inclusivity. The refresh will include the change of Green’s classic high-heeled boots into a pair of fashionable sneakers and a more “neutral” shade for the mascots’ arms and legs.