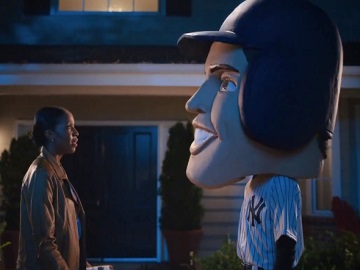 MLB promotes its shop, where fans can their favorite team gear, in a series of hilarious ads.

One of them features a woman breaking up with her boyfriend, who is a baseball fan and wears a bobblehead.

“Listen, I think I need someone more emotionally available,” she tells him, arguing that they seem like a good match but, in person, she just gets a lot of mixed signals. Asked if it’s the bobblehead the reason for this, the woman adds that she loves his smile, but she “can’t do this anymore”. When he tries to say something about a home run, his girlfriend asks him to not do this.

At the end of the commercial, the voiceover points out that “There’s a better way to bring the game home” and urges viewers to visit MLBshop.com for their favorite team gear and special offers. The products shown on the screen are a Nike New York Yankees Women’s Home Replica Team Jersey, New Era Los Angeles Dodgers Authentic Collection On Field 59FIFTY Fitted Hat, and the MLB Shop Houston Astros Ultra Travel Tumbler.