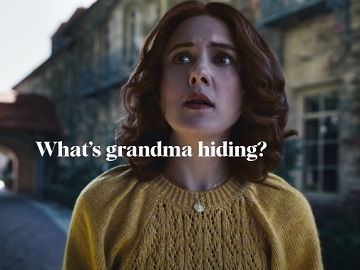 One of the them opens with Bates’ character in her mansion burning a document. When her granddaughter, Maddie (played by Grace Rex), shows up, she starts running away and opening all kinds of secret passages by giving statues wet willies, raspberries on their bellies, slaps across the face and tweaked nipples. Maddies tries to follow her but at some point she loses Grandma, who is obviously hiding something.

“What’s Grandma hiding?” an onscreen line reads at the end of the ad, which urges viewers to download Merge Mansion. The game is free to download on the App Store and Google Play, but some game items can be purchase with real money.

In another ad, Maddie discovers that her Grandma’s garage is filled with knives.

Merge Mansion is a game in which players must help Maddie investigate her family’s past by merging their way through the grounds, fixing up, cleaning up, and restoring the mansion and its gardens to their former glory.

Merge Mansion has over 10 million downloads and made over $38 million in less than a year after its release.

This is not the only mobile game endorsed by a celebrity. Cyberpunk 2077 got Keanu Reaves, Words With Friends got Lady Gaga, and World of Tanks partnered with Arnold Schwarzenegger for their 2022 event.