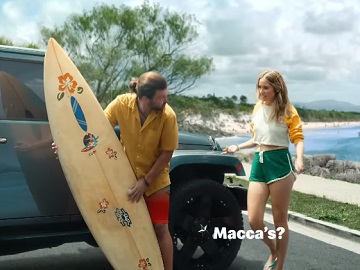 McDonald’s UK has launched a new global campaign, which marks the chain’s largest campaign to date, timed to the 2022 FIFA World Cup.

The main advert, directed by Darius Marder and Alan Yang, features a diverse range of soccer fans of different ages, races, nationalities and walks of life, in both victory and defeat, asking the question “Wanna go to McDonald’s?” to family, friends or colleagues.

The spot was filmed in four locations around the world and features ten languages and four dialects, as well as a host of celebrities, including TikTok personality Khaby Lame, Twitch streamer Edwin Castro, K-pop artist ITZY, and actor Jason Sudekis. The latter is shown at the end of the video, asking his therapist, apparently, if he went to McDonald’s without him.

The fast-food restaurant chain has also partenered with nonprofit FareShare to ensure every meal delivered on game day is matched for a family in need. There also is a partnership with soccer players from Wales and England men and women’s teams to encourage sign-ups for the free FUn Football sessions.