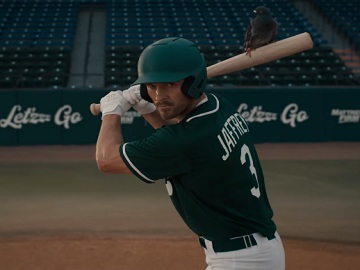 Mattress Firm highlights that its Sleep Experts train for 200 hours to help find the perfect mattress for you, in one of its latest ads.

The spot features Lewis, a baseball player whose reflexes are 200 hours delayed due to the fact that he suffers from junk sleep. “When you suffer from junk sleep, your game does too,” the voiceover says as Lewis is shown ready to hit the ball but waiting for hundreds of hours before doing that. Next to him things change, night comes, rainy days come, until he eventually moves.

The narrator also mentions that, luckily, that’s the same amount of hours the Mattress Firm Sleep Experts train to find the perfect mattress for you.

The Ray Donovan actor appeared in a 90-second commercial created by agency Droga5 New York, which highlighted that junk sleep, a problem you get from a bed that isn’t right for you, is the cause for multiple things that many people experience, such as calling Kevin “Keith,” leaving the laptop on the bus, forgetting the one thing your boss said not to forget, and more.

Earlier this year, in February, Schreiber reprised his role for a new ad. This time, the spot was set in an NYC all-night diner and the protagonist is Joanne, a woman played by Grace Rex, who does all kinds of weird things because of her lack of sleep. She binges on breakfast platters, chats with a pigeon about career moves, and helps some ski-masked baddies rob the register, which makes Screiber urge viewers to not let junk sleep lead them to a life of crime.