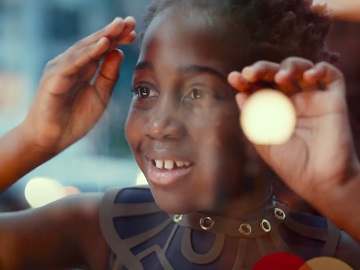 Mastercard promotes the upcoming Black Panther: Wakanda Forever movie in a new commercial, highlighting that small business heroes are all around us.

The 15-second spot features a young girl looking through the window of a bookstore (called Comma Bookstore & Social Hub) and then entering to see an object that got her attention. It’s a pearl bracelet that turns the owner, named Egypt Otis, into a character from Wakanda Forever.

“Super Heroes run our small businesses. And Mastercard tools help extend their reach far beyond the storefront. Because when you can see the Super Hero you can be, that’s Priceless,” the voiceover says in the ad.

Mastercard is not the only brand promoting Marvel Studios’ upcoming Black Panther movie. Target has also released a dedicated commercial, featuring Dominique Thorne, the actress who plays Riri Williams in the movie, building an upgraded armour suit and going to Target to get some more supplies for her creation. GEICO and Lexus have also released dedicated ads to raise awareness on the theater premiere of this film.