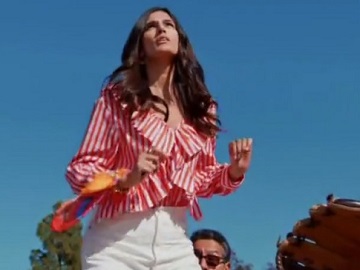 Marshalls says that anything can happen when you shop fabulous brands at its stores, in its latest commercial.

The ad features a mother (played by actress Shelly Bhalla), at her daughter’s Little League game, who passes her toddler to a nearby parent and stands up from her seat to catch a ball. She manages to do an iconic catch, to be remembered in the history of the baseball team, whose mascot is a toucan. According to the voiceover, the woman, who considers herself a “regular” mom, managed this performance thanks to her fabulous top, which she got for an amazing price at Marshalls.

The commercial concludes with the tagline “Fabulous Brands. Feel Good Prices.” appearing on the screen.

The soundtrack is the 2021 single “Party Animal” by Romanian singer Jimmy Dub, from his album of the same name.

Another ad features a curly woman strutting down the sidewalk and telling an USPS worker that her colorful outfit is from Marshalls and cost her way less than it should have.