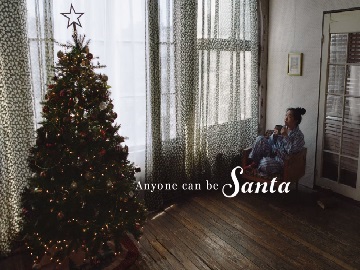 Marine Toys for Tots, the U.S. Marine Corps Reserve’s premiere Community Action Program, is inspiring donations to children in need through a new campaign, titled “Anyone Can Be Santa”.

The 60-second spot, created by agency Wunderman Thompson, aims to highlight the simple yet magical connection between a donor and a child in need by showing a woman making preparations for Christmas while in the background a girl’s letter to Santa is read.

“Dear Santa, I hope you are having a good day at the North Pole. Is it cold all the time there? Is that why your cheeks are so rosy? I bet all of your brains are very excited. It’s your beard long? My dads is scratchy. My mom says I’m a good helper. But you didn’t come last year. Was my chimney broken or did you forget? I do that sometimes. I just really hope this year when I wake up I’m gonna see that you came to my house, too,” the girl’s voice is heard in voiceover.

At the end of the commercial, the little girl is finally shown going into the living room on Christmas morning and finding a small wooden train donated to Marine Toys for Tots by the woman featured throughout the video.

“Anyone can be Santa” an onscreen line reads at the end of the ad, which also encourages viewers to donate to Toys for Tots and help the Marines deliver hope to a child in need.

The campaign is set to air on broadcast and radio throughout the holiday season.