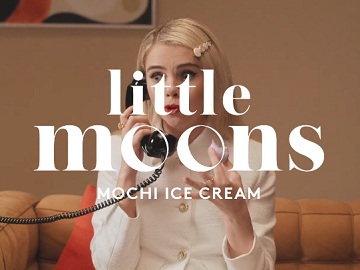 Little Moons and Channel 4 have teamed up for a new campaign, which actually marks the first TV brand partnership for the delicious balls of mochi ice cream.

The spot created by agency mcgarrybowen London features Northern Irish actress Saoirse-Monica Jackson (known for portraying Erin Quinn on the Channel 4 sitcom Derry Girls) as a blonde woman who gets a phone call from Channel 4 and asks her to try the Little Moons and describe them in her own words. After tasting one of the delicious treats, the protagonist feels transported into another world, surrounded by Little Moons, and – once she’s back to reality – concludes that they are from another world and advises the Channel 4 team to try them, too.

According to Mediahub UK, which announced the launch of the collaboration between Little Moons and Channel 4, this partnership “has been secured to create noise and fame across the Little Moons audience, driving consideration and ultimately increasing penetration across their audience”.