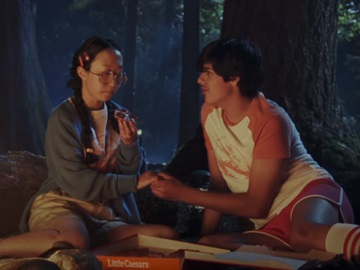 The 15-second commercial features a teenager named Billy asking his date, Cindy, with whom he is by the campfire, at night, if he thinks their crispy flavor will last forever. “All we have is thin crust summer, Billy!” answers Cindy, who’s holding a slice of Little Caesars Thin Crust pizza. When Billy tells her that he loves her, Cindy points out that he actually loves is the flavor of this thin crispy crust. Billy admits he can’t help it and Cindy says “Peace out, Billy!”.

“It’s a Hot-N-Ready Thin Crust Summer at Little Caesars,” the voiceover says at the end of the commercial, which informs viewers that they can grab a Thin Crust Large Pepperoni pizza for $7.49 between 4 and 8 PM.

The menu item is available at participating locations from June 16 through August 7, 2022. Prices, which do not include tax, may vary and are higher AK, HI, and third-party online sites.