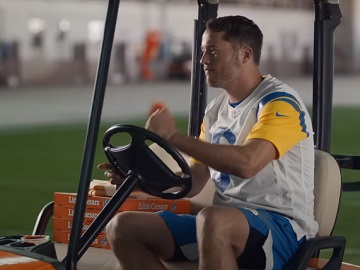 Little Caesars has released a series of new ads to celebrate its status as Official Partner of the NFL.

One of them, titled “Pizzas & The Footballs”, features a man and his son having “the talk”. Asked by his son where his sponsorships come from, the father starts giving the following explanation: “You know, son, when a pizza loves a football very much, they become official. And that’s what happened when Little Caesars became the official Pizza Sponsor of the NFL.” At this point, Matthew Stafford appears in their living room, right on the sofa, next to the boy, and asks him if he’s gonna take a bite out of the slice of pizza he holds. “I sure do, Los Angeles Rams quarterback Matthew Stafford,” answers the boy, named Timmy.

“That’s right, Timmy. Little Caesars is the Official Pizza Sponsor of the NFL,” the voiceover declares at the end of the commercial.

This is not the first ad starring Stafford. The Rams quarterback appeared in another NFL-themed commercial, released earlier this year, in August.

This partnership also includes a charitable giving component. The Little Caesars Love Kitchen, a big rig pizza kitchen on wheels, which has been serving the homeless and hungry since 1985, will visit key NFL event cities throughout the year and provide ongoing post-event community support, including around the 2024 NFL Draft which will take place in Detroit.