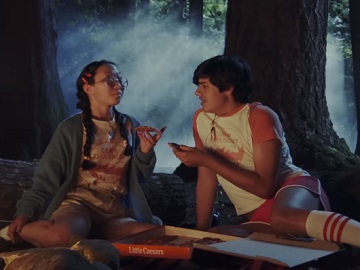 The 15-second spot opens with the voiceover introducing “your new summer love Little Caesar’s thin crust pizza, with toppings all the way to the edge and a crispy crust”. The next scene shows a teenage couple, with the boy, named Billy, telling his girlfriend, Cindy, that he loves her. She, however, interrupts him, saying she only loves thin crust.

“Ouch, Billy!” the voiceover says at the end of the commercial, mentioning that it’s Hot-N-Ready for summer at Little Caesars.

The Hot-N-Ready Thin Crust pizza will be available for $7.49, at participating locations from June 16 to August 14, 2022. Prices may vary and are higher in AK, HI and third-party online sites.