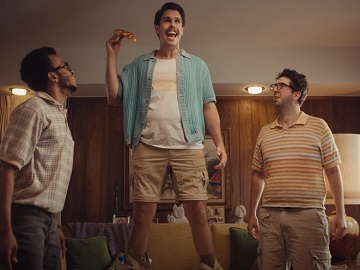 The spot features a group of friends eating the new Fanceroni Pepperoni from Little Caesars and praising its ingredients, namely the hundreds of crispy old world pepperoni and the cheesy crust edge. When one of them describes the Fanceroni as “fancy”, Tim wonders if he is fancy enough for the Fanceroni given the fact that he’s wearing cargo shorts. At this point, another man, who’s also wearing cargo shorts, tells him that fancy isn’t measured by inseam and that fancy comes from the inside because “if you are what you eat, the we’re all feeling mighty fancy today”.

The commercial ends with the voiceover urging viewers to try the Fanceroni Pepperoni with over a hundred old world pepperoni, for just $9.99 (Plus tax where applicable).

Little Caesar’s Fanceroni Pepperoni Pizza is a large, round pizza topped from edge-to-edge with “over 100 crispy Old World Pepperonis” as well as crisped cheese to the very edges. It was launched on August 8 and will be available at participating locations until October 16.