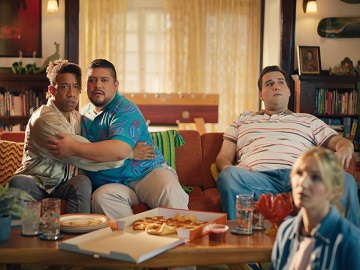 Little Caesars has challenged TikTokers to answer one tough question: “Could you really be the Batman?”.

“Bringing home the Batman Calzony from Little Caesars might make you feel like Batman, but could you really be the Batman?”, the voiceover asks in the opening of the 30-second ad, which features @kiri.bc, @thebatmanwholaughs_, @theshredda, and @zacharykerstein, imagining how they would deal with a band of villains if they were Batman. However, it turns out they would rather be at home, on the sofa, enjoying a Batman Calzony, than patrolling the city streets at night and facing criminals.

Described as “a one-of-a-kind new product,” the Batman Calzony (priced at $7.99), combines calzone and pizza into a bat-shaped product with “buttery-tasting, calzone crust filled with garlic white sauce, cheese, and julienned pepperoni, combined with a pepperoni pizza and served with a side of Crazy Sauce,” according to the pizza chain, which announced its new menu item last week.

At the end of the commercial, the voiceover urges viewers to watch the Batman movie in theaters on March 4th.