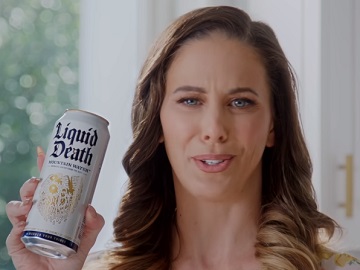 The adult film actress and “stepmom to the Internet” (as she introduces herself) stars in a new ad for the brand, saying that, when she wants to murder her thirst, she reaches for a can of Liquid Death mountain water. After lots of bleeps, she says she isn’t into single-use plastics and mentions that, while the aluminum can she holds in her hands is recyclable, the plastic bottles are not because most of them just end up in landfills and oceans.

At the end of the commercial, as she steps on a movie set, where her stepson is apparently waiting for her, ends with DeVille asking viewers to join her in Liquid Death on their mission to bring death to plastic. Eventually, the tagline “Don’t F*** The Planet” flashes across the screen, alongside the Liquid Death range.