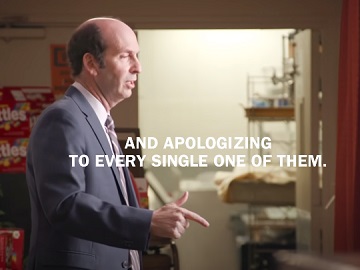 SKITTLES has released a teaser for its upcoming commercial, which announces that Lime SKITTLES are back (after 9 years). Moreover, the brand will apologize to every single person who complained for having retired the Lime variant of the sweet candies.

“Since we took away Lime SKITTLES, 130,880 people have complained online. To make amends, we’re bringing back Lime and apologizing to every single one of them” onscreen lines read throughout the 15-second “Apology Teaser”, which features a SKITTLES representative in a grey suit, surrounded by dozens of boxes filled with SKITTLES, rehearsing his apology speech. “We, at SKITTLES, apologize. I’m sorry. SKITTLES is sorry,” he says.

The ad ends with the voiceover saying the tagline “Apologize the Rainbow. Taste the Rainbow” while an onscreen line urges viewers to watch the SKITTLES apology on March 29, at 6pm EST, live on Twitch.

Lime was one of Skittles’ original “Five Fruity Flavors” that were first introduced in 1979 and was later replaced with Green Apple in 2013. n September 2021, Mars Wrigley announced that its lime-flavored candies would be “returning to the rainbow permanently” in Skittles Original packs.