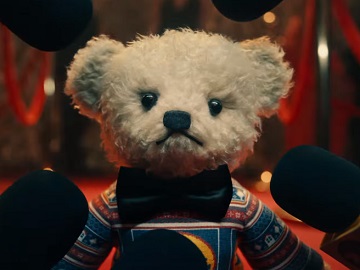 The spot opens with a man realizing that his Lidl-themed jumper shrunk in the washer. His daughter takes it and puts in on her teddy bear. “We never intended to create a Christmas character. It just happened,” the voiceover declares.

The cute teddy bear unexpectedly finds fame, which comes with appearances on magazine covers, in viral videos, and on the red carpet. The young girl, who misses her favorite toy, wishes for it to be back home in time for Christmas. At the end of the advert, the Lidl Bear is shown parachuting himself back to his family just in time for Christmas Day lunch, which includes lots of products from Lidl’s festive range, such as Christmas turkey, pigs in blankets, Yorkshire puddings, and champagne.

Lidl announced “that the Lidl bear won’t be on sale in Lidl. “You also won’t be seeing Lidl Bear for sale in any of our stores – because, in the face of unrealistic Christmas expectations and pressure, we know what really matters is being with the people we care about,” Claire Farrant, Marketing Director at Lidl GB, said in a press statement.

The supermarket chain has also launched a nationwide donation initiative called Lidl Bear’s Toy Bank, which implies giving new or unwrapped toys and games to children across the UK through the Neighbourly community network. Lidl customers can drop off new and unopened toys and games – from a small stocking filler to puzzles, and even arts and crafts, for a range of ages – to be gifted to children that need support in their local area.

In addition, the supermarket has committed £250,000 to charities during this holiday season, including a £125,000 donation for the Toy Bank initiative.