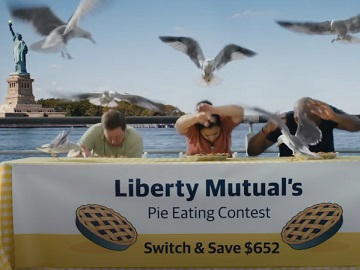 Liberty Mutual has released a new ad to highlight that customizing your insurance with Liberty is a lot easier than pie.

The spot features a pie-eating contest sponsored by Liberty Mutual, where three contestants, seated at a table covered with a spread emprinted with the text “Switch & Save $652”, are ready to start eating their pie. After the host thanks the sponsor and mentions that Liberty Mutual customizes your car insurance so you only pay for what you need, the contestants start eating but it turns out they have some unexpected opponents: some seagulls that start squawking and targeting the pies that need to be eaten.

The contestants are then heard shouting terrified.

At the end of the commercial, the voiceover adds the brand’s famous tagline “Only pay for what you need”.

Other similar ads feature a bull rider who is on a Mild Mitch for kids, a man who resembles his dog, an Afghan Hound, and acts like him, a man who seems to be a hot dog vendor but who actually sells wet teddy bears, and a trio of jump roping kids who count how much money Liberty Mutual can save you until they become tired old people.