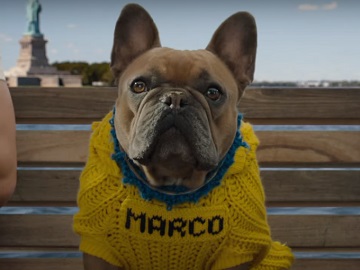 Liberty Mutual urges consumers to get customized car insurance and only pay for what they need in a new ad.

The spot features two men sitting on a bench and knitting. One of them tells the other that Liberty Mutual customizes your car insurance so you only pay for what you need. “Oh, like I customized this scarf?” the latter asks, showing off a scarf in the Liberty Mutual colors.

Impressed by the scarf, the first man takes the opportunity to show a tiny backpack he knit for Marco, his dog, who is on the bench, too, between them. The other man takes out a knit tuxedo, but the first one doesn’t stop either. At this point, he grabs a pair of men’s shoes that he knit and says the tux will go perfect with those.
“Dude, those are so fire!” his fellow exclaims, looking at the white and yellow shoes.

The commercial ends with the voiceover saying the tagline “Only pay for what you need” and with the Liberty jingle.
Liberty Mutual, the sixth largest auto and home insurer in the U.S., sells full lines of coverage for automobile, homeowners, small commercial, valuable possessions and personal liability insurance.

The Boston-based insurance company is known for its humorous spots. Previous commercials feature a bull rider who introduces himself as a professional bull rider but is actually riding a Mild Mitch for kids, a man who resembles his dog, an Afghan Hound, and acts like him, a man who seems to be a hot dog vendor but who actually sells wet teddy bears, and a trio of jump roping kids who count how much money Liberty Mutual can save you until they become tired old people. Another ad campaign from Liberty Mutual features partners LiMu Emu & Doug as they promote the company’s Coverage Customizer tool.