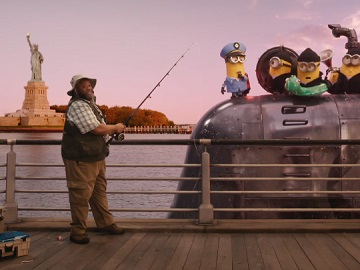 Liberty Mutual has released a new ad to promote the upcoming Minions: The Rise of Gru movie.

The spot, with the Statue of Liberty serving as the backdrop, features a man fishing and saying that this activity helps ease his mind and mentions that “it’s kinda like having Liberty Mutual” because they customize your car insurance, so you only pay for what you need.

At this point, the fishing reel whirls and a splashing noise is heard. The man is surprised to see that he brought to the surface a ship from which minions are coming out, shouting and chattering. One of the cute characters makes a spitting sound while others are still shouting and then they are all leaving.

At the end of the commercial, the minions are heard singing the Liberty Mutual jingle.

The “Minions: The Rise of Gru” will be released in theaters next month, on July 1st.