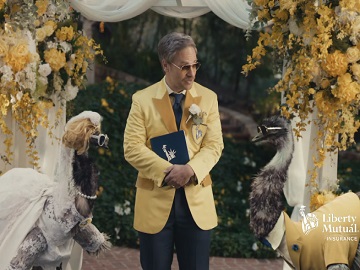 This time, Doug’s partner gets married, but there is someone having something to say in this regard. The spot features the ceremony, with Doug as the marriage officiant holding a short speech and saying “Only two things are forever: love and Liberty Mutual customizing your car insurance so you only pay for what you need”. He then adds that, if anyone objects to the marriage, should speak or forever hold their peace. At this point, an emu, who it turns out is named Kevin, squawks, making the crowd gasp, but Doug asks him to keep silent.

The commercial ends with the voiceover saying the tagline “Only pay for what you need” and with the Liberty jingle.
LiMu Emu and Doug have appeared in numerous ads over the years for the Boston-based insurance company. Developed by creative agency Goodby Silverstein & Partners (GS&P) and directed by Australian director Craig Gillespie, the commercials feature the two partners promoting the customized car insurance, as well as the company’s Coverage Customizer Tool.

In one of the ads, Doug and LiMu hit the gym, where Doug tells a man that Liberty Mutual’s Coverage Customizer Tool finds discounts and policy recommendations so you only pay for what you need. In another one, the duo spend a bright sunny day grilling up lunch in the yard with their wives. Doug’s wife, however, politely asks him to talk about something other than work, which it turns out is quite a challenge for him. In another spot, LiMu Emu encounters an unexpected adversary in his own reflection.