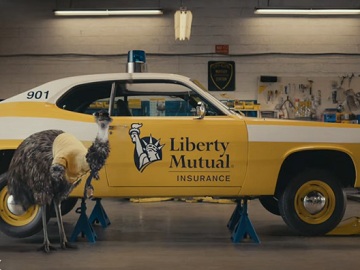 Liberty Mutual has dropped a new commercial to remind consumers that Liberty Mutual customizes your insurance so you only pay for what you need.

The 15-second spot features Doug in a garage, striking a pose while test-driving his backup vehicle – the dolly. “Liberty Mutual customizes your insurance so you only pay for what you need,” he says, while his partner, LiMu, quietly squawks. Soon after finishing the sentence, Doug returns, explaining that he forgot his keys.

At the end of the commercial, the voiceover adds the tagline “Only pay for what you need”, which also flashes across the screen, and with the Liberty jingle.

The two characters have shared the screen in numerous ads over the past years for the Boston-based insurance company. The duo has been promoting not only the customized car insurance offered by Liberty Mutual, but also the company’s Coverage Customizer Tool.

The bird was brought to life with the help of visual effects and content creation studio The Mill, which used cutting-edge CGI technology, including a proprietary fur and feather system.