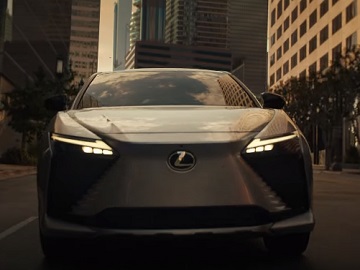 The spot, part of the automaker’s new “An Electric Future” campaign, features members of the Dora Milaje, led by General Okoye (played by Danai Gurira), in the new Lexus RZ 450e, on their way to an event, escaping some of their foes through the city.

At the end of the commercial, the voiceover introduces the first-ever all-electric Lexus RZ 450e, says the tagline “Empower future that lasts forever” and urges viewers to watch Marvel Studios’ “Black Panther: Wakanda Forever” movie in theaters on November 11.

Directed by Ryan Coogler from a screenplay he co-wrote with Joe Robert Cole, “Black Panther: Wakanda Forever” revolves around Queen Ramona, Shuri, M’Baku, Okkoue and the Dora Milaje as they fight to protect their nation from intervening world of powers in the wake of King T’Challa’s death. According to the official synopsis, “As the Wakandans strive to embrace their next chapter, the heroes must band together with Nakia and Everett Ross to forge a new path for their beloved kingdom”.

The Lexus LC 500 Convertible and the Lexus GX make appearances in the actual film.