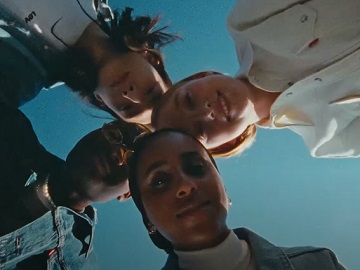 Levi’s promotes the exclusive Levi’s by Zalando collection, now available for purchase at Zalando, in a new commercial.

Titled “It’s Our Tomorrow,” the spot features four individuals who are reimagining the times to come. Amira, the poet, Promise the singer, Iris the painter, and June the performer shows us their visions in a 90-second video, which is a montage of footage featuring them. “I see a future full of love, full of hope, full of peace. Stop and breathe for a second, look down on your feet, no ground between your body and soul. I see a place where we look into each other with no fear of judgment. Stay strong, don’t lose your mind, is blown. I see a bright future, a future where women don’t have to fit into a certain frame,” they recite.

At the end of the commercial, they all say at once “It’s our tomorrow”.

The Levi’s by Zalando collection includes a variety of pieces for men and women, such as the Jackson Worker summer jacket in meteorite, the Trucker Jacket denim jacket in palmer trucker, a Dani corset top in indigo ston, various print unisex T-shirts, straight let jeans, and more.