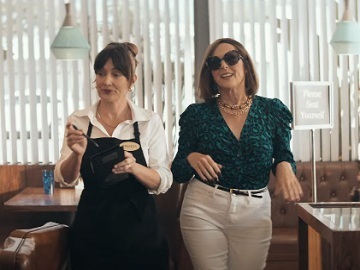 LendingTree, the fintech brand that allows borrowers to evaluate multiple lenders at once, has enlisted SNL star Molly Shannon to star in its newest ad campaign, which aims to build trust and comfort with those seeking financial assistance.

The spot features Shannon’s character, a woman named Linda, catching up with her friend Brenda, who’s a waitress, if she got her car fixed after her “fenda benda”. The latter says she didn’t and that she’s still looking for a “lenda”. At this point, Linda tells Brenda that, with LendingTree, she didn’t have to look for lendas and that “the lendas came to Linda”. She then explains that LendingTree found all kinds of personal loan lendas for her and that “you don’t have to be a big spenda to get that kinda legal tenda” because “they’ve got a contenda for nearly any agenda”. This makes Brenda confident that she’s gonna find a lenda and sets out to bring Linda a cup of coffee the way she likes it.

The commercial ends with the voiceover saying the brand’s new, simplified tagline “LendingTree. You win”, which appears on the screen after the traditional tagline, “When banks compete, you win”.

The campaign, developed in partnership with agency Mekanism, also includes another spot, set in a diner, in which the SNL alum tells a woman seeking a mortgage loan that she used LendingTree to finance her “hacienda” and points out that “it’s magenta”.

As part of the campaign, Lendingtree is also redesigning its website and offering new features, such as personalized insurance check-ups and a customer interface that incorporates feedback in real time.