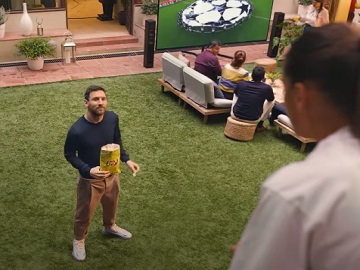 The spot features a group of friends having their soccer ball stolen by a dog during a game. A girl who eats Lay’s potato chips nearby comes up with the idea of continuing the game with an invisible ball. She dribbles the orb and then passes it to someone else. Soon, everyone joins in, kicking the fake ball.

Unfortunately, their game is interrupted again when the make-believe ball hops a fence. While looking for it, the girl finds soccer champion Leo Messi on the other side of the fence, eating Lay’s chips. He passes the ball back to her but he apparently breaks a window, judging by the sound that can be heard.

“Grab the moments. Lay’s. Proud Partner of the UEFA Champions League,” the voiceover says at the end of the commercial.

Messi is no stranger to advertising. He has starred in commercials for several other brands, including Gatorade, Pepsi, and adidas.

Previous: DUPIXENT Help Heal Your Skin From Within Commercial
Next: M&M’s American Song Contest A Capella Commercial – Could Have Won This Show