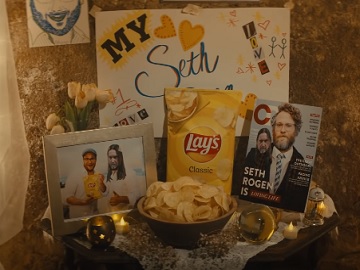 Lay’s has dropped a first teaser for its Super Bowl LVI commercial.

The 15-second video features a long-haired, bearded man dressed in black standing in a basement and slowly chanting “Oh, Seth Rogen, oh, Seth Rogen, where are you? Where are you?” set to the melody of the French children’s nursery rhyme “Frère Jacques”. He also looks down to a sort of altar, which is a table covered in a lace cover, where various items involving Seth Rogen, such as a hand-drawn portrait, a magazine with Rogen on the cover, and a poster with yellow hearts and the text “My Seth”, are laid down. There also are a photoshopped picture of Rogen and the mysterious man holding a bag of Lay’s Classic Potato Chips, a vase of tulips, candles, a centerpiece of Lay’s chips, and dried flowers.

“Big fan of Seth? Tune in on 2.13.22.” an onscreen line reads at the end of the commercial, announcing thus the the full commercial will be unveiled during this year’s Super Bowl. According to Frito-Lay, Rogen will be in the actual ad.