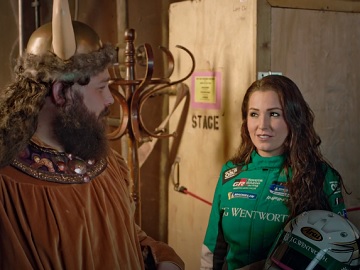 JG Wentworth has released a new commercial to announce its surprise performance debut on June 13.

The spot features Sheena Monk, driver of the #3 J.G. Wentworth McLaren 570S GT4 with Motorsports in Action in the IMSA Michelin Pilot Challenge, telling a man wearing a Viking helmet that the opera doesn’t use it anymore. The financial company asks viewers to set their calendars and be sure not to miss its surprise performance on June 13.

JG Wentworth says that, for more than 25 years, it has been focused on helping individuals overcome financial hardships and achieve a greater degree of financial freedom. The financial company also has a debt relief program that implies negotiations with people’s creditors so they could pay less than the total amount they owe.