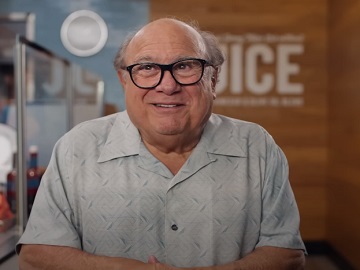 In one of the spots, he tells viewers they have to see their sub freshly sliced, while watching a Mike Jersey’s employee slicing fresh turkey ham and provolone for sandwiches. “Yep, there’s some things you just gotta see,” he declares, mentioning some lovebirds (referring to a couple eating a sub from both ends) and a man “pulling off business and casual” (a reference to his suit consisting of shirt, tie, and blazer, worn with shorts – a combination he names “bizasual”).

As the spot ends, DeVito declares that you also gotta see him stealing half of another customer’s sub. “You better eat it fast ’cause I’m coming,” he tells the young man.

“Sliced right in front of you. A Jersey Mike’s thing,” DeVito says at the end of the commercial.