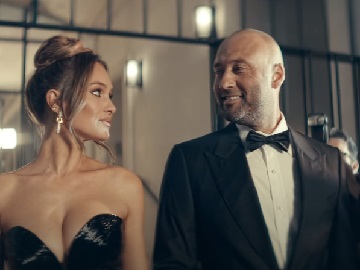 The campaign film, titled “Eyes Wide Open”, features the couple driving the Grand Wagoneer across various types of terrain from the city streets to mountain roads.

“Ever wonder why they call it the American Dream and not the American Goal or the American Plan? Maybe it’s because in dreams you can do anything. You can be reborn in the Motor City. And rise up in the city that never sleeps. You can turn time inside out, again and again. In dreams, you can hold your entire world in the palm of your hand. And you can do it all with your eyes wide open,” the voiceover says in the 60-second ad, which ends with the tagline “Live a Grand Dream” flashing across the screen.

The spot debuted on October 28, during the first game of world championship baseball series.

“The Grand Wagoneer Obsidian driven by Derek and Hannah Jeter embodies American authenticity with an interior that has artisan levels of craftsmanship. And with the all-new Hurricane Twin Turbo 510 engine, delivering 510 horsepower and 500 lb.-ft. of torque, the Grand Wagoneer offers the power, range and dynamics that everyone, including one of America’s most celebrated ballplayers, can truly appreciate,” Jim Morrison, senior vice president and head of Jeep brand North America, said in a press release.