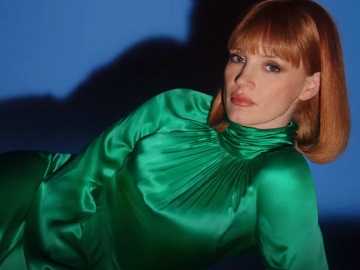 The Oscar-winning actress and film producer fronts Gucci’s new campaign, from Creative Director Alessandro Michele, that includes both print and a commercial, in which she showcases the latest timepieces from the GUCCI 25H collection.

Chastain, who’s wearing a long green dress, says in voiceover “It is time I seem to dance with. It’s necessity I feel. It’s this mystery that excites me. The conclusion that scares me. Then there’s chance. Wonder and certainty. And the dance. That I dance. All of the time. Either way”. At the end of the commercial, which is set to the tune of “Phat Planet”, a song by the English electronic group Leftfield, taken from their 1999 album “Rhythm and Stealth”, the actress says “It’s Gucci time”, the tagline that also appears on the screen.

The fashion house has also teamed up with Idris Elba in the past to promote its 25H watch.