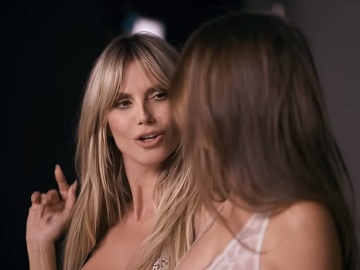 The spot features the supermodel and her daughter on a set, sporting Intimissimi underwear from the Fall/Winter 2022 collection, and having fun while posing for a print campaign. The two are shown being styled by make-up artists and hair-stylists and lipsinging to Rossini’s famous opera song “The Barber of Seville”. Lorenzo Martin and Dominique Diaz worked on hair and Linda Hay took care of makeup.

Among the pieces they showcase are a white balconette bra and matching panties, a Brazilian-style bikini, and a black balconette bra with floral embroidery.

The commercial ends with the voiceover saying “Crafted with elegance, made with passion” and adding the tagline “Intimissimi. The art of Italian lingerie.”

Intimissimi has also teamed up, in the past, with several other celebrities, including Irina Shayk, Gisele Bündchen and Chiara Ferragni. For its FW2018 campaign, the brand enlisted Sarah Jessica Parker. The Sex and the City star was featured in a commercial set to the 1966 pop single “Nessuno mi può giudicare” (English: “Nobody can judge me”) by Caterina Caselli walking around Manhattan in a balconette bra and silk pajama set, accessorized with a clutch and high heels, and leaving people around her speechless.