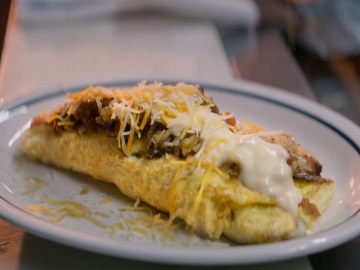 The ad features a cook preparing the new Deluxe Three Cheese & Bacon Omelette in an IHOP kitchen and a diverse cast of consumers enjoying it. While some of them are ordering it while spending a night with friends, others choose it on a morning with family, but one thing is sure: this new menu item, with three kinds of cheese and hickory, smoked bacon, puts a smile on their plate.

The commercial, scored by a cover of Louis Armstrong’s iconic “When You’re Smiling (The Whole World Smiles With You)”, ends with the voiceover urging viewers to try the new Deluxe Three Cheese & Bacon Omelette. The ways consumers can have it range from dine-in to take-out to curbside and delivery. Fans can also join the IHOP’s Rewards Program through the chain’s website or mobile app and earn rewards (called PanCoins) by spending money with the brand.