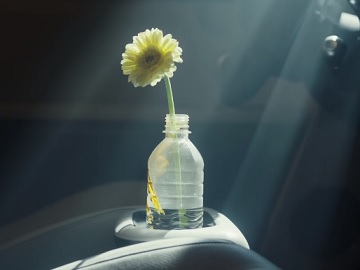 Hyundai Motor Company commences its transformative efforts for a sustainable future with “Continue”, a 3-minute film that tells the story of PET, a 48-year-old plastic bottle, and his friend, Lonely Lon.

The 3-minute video tells the story of PET, a plastic bottle thrown away at the garbage truck in New York 1973. His journey also takes him to Beijing, Barcelona and many other places, including the ocean.

One day, ten years after his “birth”, PET meets his old pal Lonely Lon, a blue banister covered by a net in the ocean. As they asks themselves if useless plastic like them could change to create a beautiful world, a young girl picks PET up from the water, puts a flower in it and then places it in her dad’s car, on the passenger’s seat. It is then that PET hears Lon’s voice, coming from the back seat. It turns out Don had been “saved” from the ocean by some divers and taken to a car factory, where he has been used in the manufacturing process. “I was born again as a car,” Lon tells him with enthusiasm.

The film ends with the two fellows, who now found each other again, ready for a new adventure together.

The automaker highlights that upcycling materials that recycle ghost nets are used in its factories and that it will “Continue” to take care of the planet we live on, to innovate for a new mobility, and create hope for future generations.