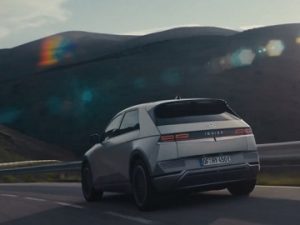 Hyundai promotes its IONIQ 5 in a new advert, encouraging people to power their world with Hyundai IONIQ 5.

The spot features a man and his family on a road trip across the country, visiting his father. Arrived at the destination, a remote house, he tries to impress his old dad by asking if he saw one of those electric cars. But it turns out he actually drives one, having an IONIQ 5 charging in the garage.

At the end of the commercial, the voiceover says “From long-range driving to boundless connections. Let Hyundai power your world”.

The automaker has been promoting its all-electric IONIQ 5 in several other ads in the past months. Some of them tie in with the Spider-Man: No Way Home movie and star Tom Holland as Spider-Man. Another commercial features actor Jason Bateman, who has been with Hyundai since starring in a 2019 Super Bowl ad, going from 1800’s camping to modern-day glamping with the help of available two-way charging on the fully electric Hyundai IONIQ 5.

Previous: GEICO Secret Identity Commercial
Next: State Farm Guy Carrying His Parents on His Back to a Date Commercial