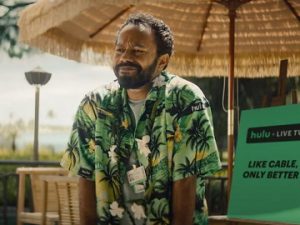 The spot is set at a Hulu corporate retreat and shows a group of employees clad in Hawai-style print shirts trying to come up with ideas for an easy-to-remember name for Hulu + Live TV. The team leader points out that nobody knows what Hulu + Live TV is. The team members declare that it comes with over 75 live channels with sports like NFL games plus Hulu’s entire streaming library plus Disney+ plus ESPN+. “What if we change the name?” one of the team members asks. Their leader invites them to share their ideas, which they do. However, “Super Hulu”, “Hulu Bold”, “Hulu + Live TV+” are labeled as bad ideas, but when a man suggests they call it “Hulu + Live TV+++”, the leader decides it’s a good idea, to everyone’s surprise. “It’s dumb, but we’re gonna go with it,” the leader declares.

The commercial ends with the new name appearing on the screen.