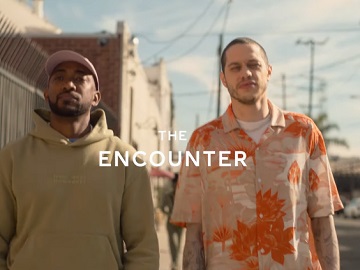 H&M has enlisted Pete Davidson to star in its new Wear That Feeling campaign.

The spot, titled “The Encounter,” features the comedian/actor, clad in a floral print shirt from H&M Man collection, walking down a sidewalk with a friend. At some point, he hears a voice saying “cool shirt” and thinks it’s his friend praising his new shirt. He says “Thanks, man”, but the guy answers he didn’t say anything. When he hears the same voice again, saying “Cool shirt”, he points out he said that twice already, but his fellow keeps denying that he said something about his shirt. However, he does notice that “it is a nice shirt”. The pitchy voice begins talking again and it soon turns out it belongs to a parrot whose owner drives a blue car down the street.

At the end of the commercial, Davidson confirms that it is indeed a nice shirt and it “makes you wanna walk like this”.

Davidson was announced the face of H&M’s new menswear campaign, which emphasizes the powerful connection between clothes and the confidence it gives men when taking on everyday life, on April 27.

“Collaborating on this campaign was a great experience. We had a lot of fun creating the photos and content. The clothes are comfortable and feel great to wear which is what I love about H&M,” Davidson said in a press statement.