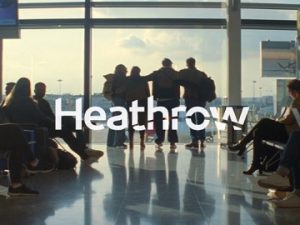 “Let the festive travels commence and depart as you mean to go on from Heathrow this Christmas,” this is the message from the Heathrow Christmas as part of its holiday 2022 campaign, created by agency St Luke’s and directed by Molly Burdett.

The 60-second advert, titled “The Gift”, features a married couple in the departure lounge of Terminal 2, waiting to embark on their flight without their children. They are drinking champagne to celebrate the event, but the mother doesn’t seem happy at all. On the contrary, she is quite sad that they are not going to spend Christmas as usual, in the same formula, especially when she sees families with children traveling together for the holidays.

The ad also shows the two life partners going through some of the airport shops, trying on headphones in InMotion Entertainment, and buying various items in the World Duty-Free store. While they are having a bite at one of the restaurants, the husband tells his wife he’s got an early Christmas present and asks her to close her eyes.

It soon turns out his gift for her consists in bringing over their two grown-up children, to join them on their Christmas getaway. Deeply moved and happy to see them, the mom rushes to hug them all.

The spot, which marks the airport’s first work with St. Luke’s as lead strategic creative agency, ends with the tagline “This Christmas, depart as you mean to go on”. Launched on November 14, it is set to run on VOD, in cinemas, and online.

The campaign also includes shorter versions of the advert, each showcasing the vast range of retail brands and restaurants available at Heathrow.